Mr. David Stenn and I have collaborated to provide some very urgent news to Clara Bow fans and Silent Movie enthusiasts and collectors. 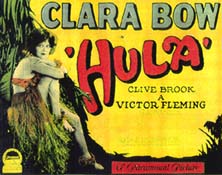 Out of the 57 Clara Bow films that were made during her
film career, only about half of those survive in one form or
another. Some have been preserved. WINGS, IT,
MANTRAP, and DANCING MOTHERS have all enjoyed
relative success at film conventions and revivals. A very
few have even been shown on AMC and TCM. Still others
can be found somewhere on video. Some of these titles
include: DOWN TO THE SEA IN SHIPS, CAPITAL
PUNISHMENT, THE PLASTIC AGE, FREE TO LOVE,
KID BOOTS, HULA, THE WILD PARTY, THE SATURDAY NIGHT KID,
DANGEROUS CURVES, TRUE TO THE NAVY, "LOVE AMONG THE
MILLIONAIRES, NO LIMIT, and CALL HER SAVAGE. Curiously, many of these titles that are found on
video, are in real danger of being extinct. In fact,
many Clara Bow talkies exist only on nitrate. As you
may know, nitrate is very flammable and
disintegrates after so many years. Furthermore, just
because a film exists (in nitrate) in a film archive,
does not make it safe. Clara Bow's 1924 feature,
BLACK LIGHTNING is case and point. It does exist, but time has not been very friendly to it. The nitrate
print that exists at the UCLA Film Archive is
decaying rapidly. A fully restored Russian print has
been recently discovered. But at the time of this writing, the condition of this print
remains a mystery. It is hoped that this Russian print can be "married" to the English titles
that exists on the decayed version.

Clara's 1927 feature,ROUGH HOUSE ROSIE still existed back in the
1960's. One important film historian and collector begged the studio to
obtain permission to get it preserved.

The unsympathetic Paramount studio
chiefs did not want to bother with a project that could not make
profits for them. As a result, we will never see this adorable "boxing" feature,
because there is nothing left of it, save for a trailer. In fact, all four releases
from 1928 -- THE FLEET'S IN, LADIES OF THE MOB, THREE
WEEKENDS, and RED HAIR (which opens with a sequence in technicolor)
are all lost.

*There is only one nitrate print of MY LADY'S LIPS. If there is nothing
done with this title in the near future, it will disintegrate into nothing.

*MY LADY OF WHIMS is still around in 16mm. However, there is no
complete 32mm print of this film in existence. Much of the 32mm material
that does exist on this feature needs to be assembled.

*CAPITAL PUNISHMENTis also waiting to be pieced together.

*About thirty-five minutes of Clara's western, THE BEST BAD MAN,
co-starring Tom Mix, sits in MoMA as a safety negative. No further
preservation work has been planned.

* NO LIMIT, now owned by Universal, remains in bad shape. In fact, most of Clara's
talkies are in need of some sort of restoration work.

As you may know, David Stenn has taken on the responsiblity
of preserving Clara Bow's film heritage. He has completely
funded restoration on THE SATURDAY NIGHT KID (with
Jean Harlow in some walk-ons) and the 1925 feature,
PARISIAN LOVE, which has recently been shown at the
UCLA Film Preservation Festival. Most recently he has
financed restoration of the trailer to THE SCARLET WEST,
Clara's other western. But he can't do it alone, and as they say, "Nitrate won't wait".

Preservation is very expensive. Mr. Stenn reports that the average cost to preserve a silent
film is approximately $15,000. Add on $10,000 to this amount, and that's how much it
costs to preserve an early "talkie". It costs about $7,000 to convert nitrate film to a printed
duped negative. 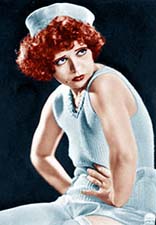 In response to the need for funds to preserve Clara Bow's
diminishing film heritage, The Clara Bow Page has set up "The
Clara Bow Film Preservation Fund." If something is not done
soon,many of Clara's films will face virtual extinction. Anyone is
welcome to contribute to this fund. Any dollar amount is welcome. I
feel that if many people contributed a small amount (or big amount),
that we can all make a big difference. Contributions will be
deposited into "The Clara Bow Film Preservation Fund" at The Tompkins County Trust Company, Ithaca, NY. At an appointed
time, or when enough (or near enough) funds are attained, a certified
check will be "earmarked" and sent to the UCLA Film Archives (or
wherever the proposed preservation project will be done). Time is of the essence. As they
say, "Nitrate Won't Wait". Please contribute. Please make out all checks out to:

Here is an update list of endangered Clara Bow films. Included in this list are nitrate films
that need immediate attention,films that are believed to be held by collectors, and films
that need special attention. Please help!